Never in a million years would I have expected to win a free trip to Iceland but it happened and I’ll forever be thankful for the opportunity to visit such an amazing country with my colleagues.

The flight was around three hours so I brought our netbook with me to watch “You” on the way there and back. I’m a terrible flyer and need to be distracted by something whether that’s a book, film or drinks/snacks. The most interesting thing about the flight is that you don’t pass over any land so it’s all blue until you reach the island.

Our coach took us close to The Swan House Hotel which is where we were staying. I was sharing the cutest apartment with two colleagues. Apartment GOALS is all I will say and I would highly recommend it. This is a picture of us all squeezed into the lift there – living our best lives.

We arrived in the evening so went straight to dinner at Fish Market (fiskmarkadurinn), the fanciest restaurant I have ever been and probably will ever go to. The majority of people went for the tasting menu which offered exciting options like whale and lobster. I had vegetable tempura and spring rolls instead which were sensational. We also tried the most delicious bottle(s) of Sancerre that I have ever had. I probably wouldn’t have paid the £26.50 for 3 spring rolls again so I savoured them. It goes without saying that Reykjavik is an expensive place and you should be prepared to spend a lot of money there.

As we left the restaurant, we heard the tunes of It’s Raining Men – The Weather Girls down the street. This caused us to run to that venue and dance all the way up the stairs to discover the best name for a cocktail bar that I have ever seen – Pablo Discobar. Every drink on the menu had an incredible pun and they played classic party tunes all night long. Then we went to a place called Miami which is made to look like it’s set in the 80’s. Think Clockwork Orange and it’s name sake – Miami Vice. This bar had Cuba Libres and gin & tonics on tap (yes, really) and the most delicious Palomas we have ever tried. We haven’t been able to recreate them perfectly yet. We liked this place so much that we ended going back twice on the trip. 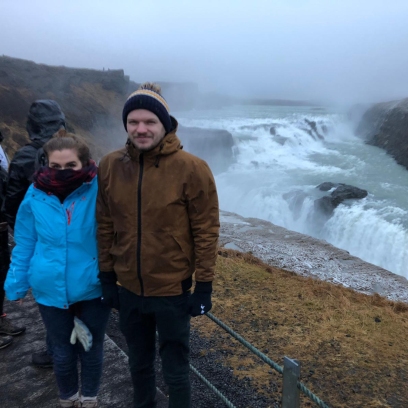 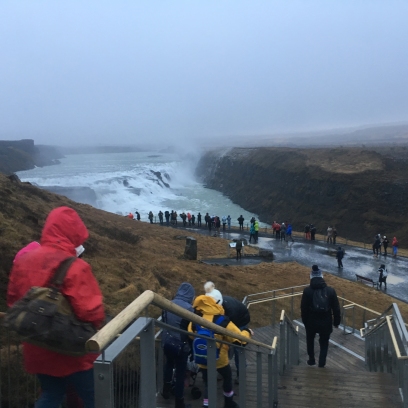 The next day, we had been booked on the Golden Circle coach tour. Some of us woke up early enough to have breakfast at a cute cafe in Reyjkjavik. I had some sort of beetroot houmous and falafel sandwich- yum! We had an eccentric tour guide, telling us stories about life in Iceland which was unintentionally hilarious. The first stop was Gullfoss – meaning Golden Falls – the most popular waterfall in Iceland. We completely underestimated how powerful it was and were being sprayed so hard it was a struggle to keep our eyes open. When this first picture was taken, I felt like I was going to be knocked over. As soon as we arrived back at the car park, I purchased a brand new hat from the gift shop. 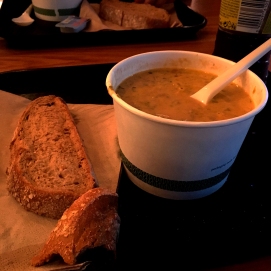 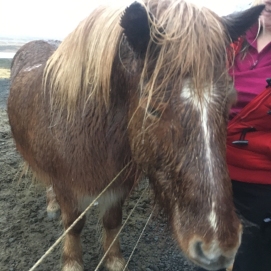 Next up we were on our way to the geysers – natural springs that shoot hot water in the air. We were warned to always face in the direction of the wind as the water could get carried and burn us. We witnessed a few massive eruptions before having some tasty soup and bread next door. They have these soup takeaways everywhere – called SUPA –  genuinely delicious. Also, I’m a big fan of the whipped butter served in all restaurants with the bread. We ate lashings of the stuff.

The last stop before heading home was Thingvellir National Park. This place was beautiful and there were views for miles. In the left hand picture, we are standing in the rift between Europe and North America. Not many people can say they have been where the plates divide. This is also where they filmed some scenes in Game of Thrones. 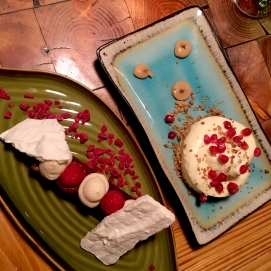 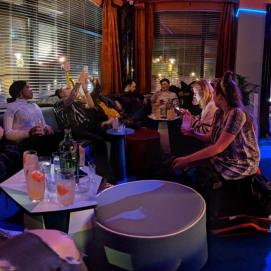 After getting showered and changed out of our soaking clothes – we were treated to dinner at another fancy restaurant called Ostabudin. I had a nut roast with a colossal portion of vegannaise. If you are vegetarian or vegan, do not be worried. There were so many options wherever we went and it was a huge relief for a fussy eater like me. The meat eaters also thoroughly enjoyed this restaurant as it served goose, ewe, horse, whale and foie gras. As an aperitif, we had to pay a visit to our new favourite bar – Miami. 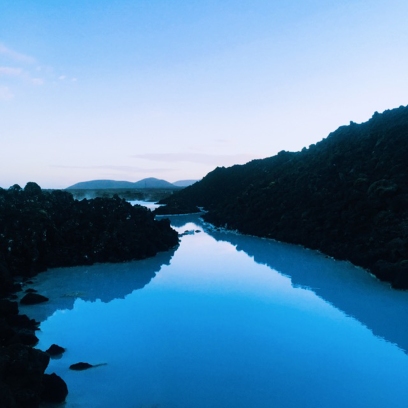 Our last day in Iceland was spent at the Blue Lagoon. We brought our suitcases with us and kept them in the luggage store so that we could head straight to the airport in the afternoon. When we arrived we were given wristbands which we could use to purchase drinks and then pay at the end of our visit. We were handed slippers and robes to make our dash to the lagoon a little more graceful. The first thing I noticed was the extreme heat difference between the floor and the water. It was like descending into a super hot bath and it was ethereal. We all swam to the mud mask station where we could scoop the product onto our faces and felt like celebs.

Then we swam to the bar where we were entitled to a free drink with our entry and could purchase more with our wristbands if we wanted – of course we did. I had a strawberry cider and some Prosecco. There was something very luxurious about drinking in the lagoon with a face mask. We also visited the sauna, steam room and hot shower. I had the time of my life. Afterwards, we were treated to another delicious meal – roasted cauliflower steak with chickpeas and more vegan mayo – yum! I get emotional thinking about food.

After our food and a few glasses of wine – whoops – we headed to the airport for our flight home. Again, an unforgettable trip and I am forever grateful for being treated to it all. I decided to spend the money I brought and didn’t need to use on souvenirs – necklaces, a mug and a t-shirt.

Thank you Iceland – hope to be back again!